There is a huge tree in the Falkland Estate Arboretum, not far from the Monkey Puzzle tree near the Maspie Burn. I thought it was a Giant Redwood, one of those soft-barked punchable mega-trees from California. After the strong winds that brought down all the Monkey Puzzle leaves earlier this year, I found some green branches under the big tree, just enough to use for my tree project. 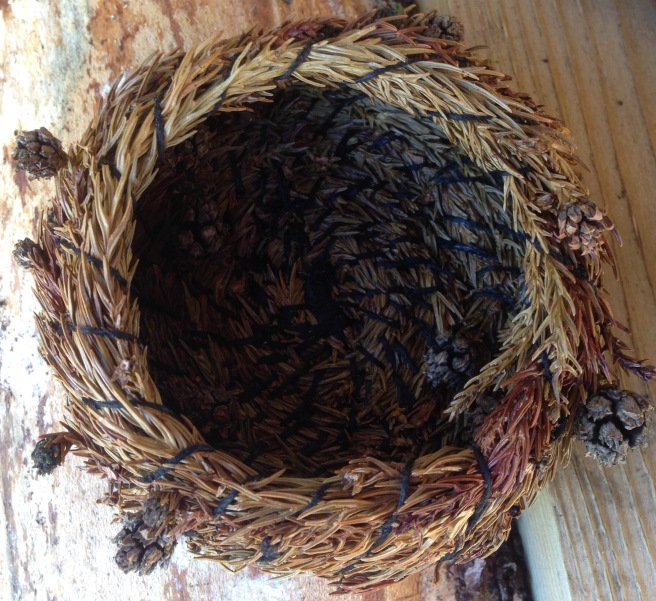 Today I decided to check which Redwood the branches came from, knowing there’s more than one species. It turns out to be something else altogether, probably a Japanese Red Cedar, Cryptomeria japonica. It is related to the Giant Redwood Sequoiadendron giganteum but comes from the other side of the Pacific Ocean, yes, from Japan. There it is called Sugi and is highly-prized for its timber and precious ancient specimens. It can grow up to 70 metres (230 feet) tall and to a trunk diameter of 4 metres (13ft).

I laid the twigs and leaves out to dry in the studio after collecting them. From the left: Hemlock(?), Lime, Monkey Puzzle leaves, Sugi, and one little twig from a neighbouring tree, possibly a Redwood. The Hemlock twigs (if that’s what they were) went brittle very quicky and ended up in the compost bin. The Sugi branches stayed flexible with a bit of soaking and made a very fragrant pair of baskets.

One thought on “Sugi”